The "Deutsches Museum" in Munich offers people of all ages the opportunity to discover various scientific topics through interactive exhibits. Currently the museum is under constructing and new concepts for the exhibits are made.

Physical topics are often abstract and not easy to understand for many people. Physical laws explain invisible phenomena and thus become even less tangible. Experiments can make physical principles tangible and understandable in a playful way.

"Ohm's law" deals with the topic of the same name and was developed as a concept for the physics department. It consists of an interactive table on which an enlarged circuit is shown.

→ How might we explain abstract physical topics such as Ohm's law in a comprehensible and tangible way?

The exhibit consists of three information levels. The stations, which are explained individually in the following, a text level, which explains the individual stations, and the data visualization, which visualizes the dependencies of the physical values in the middle of the table. The visualization adapts dynamically to the set values. 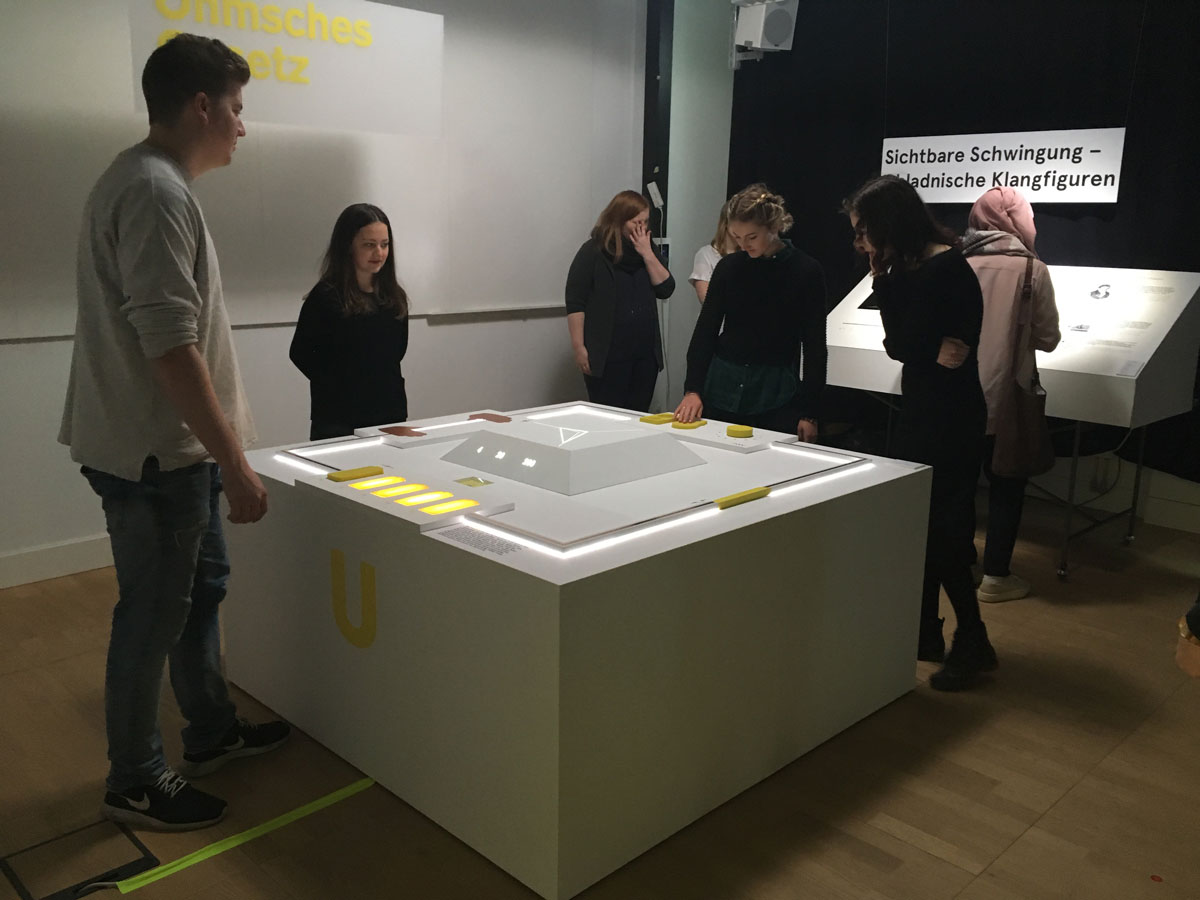 By actuating the switch, the circuit is either closed or interrupted. As soon as the circuit is closed and voltage is applied, current flows, which is illustrated by LEDs below the connectors. 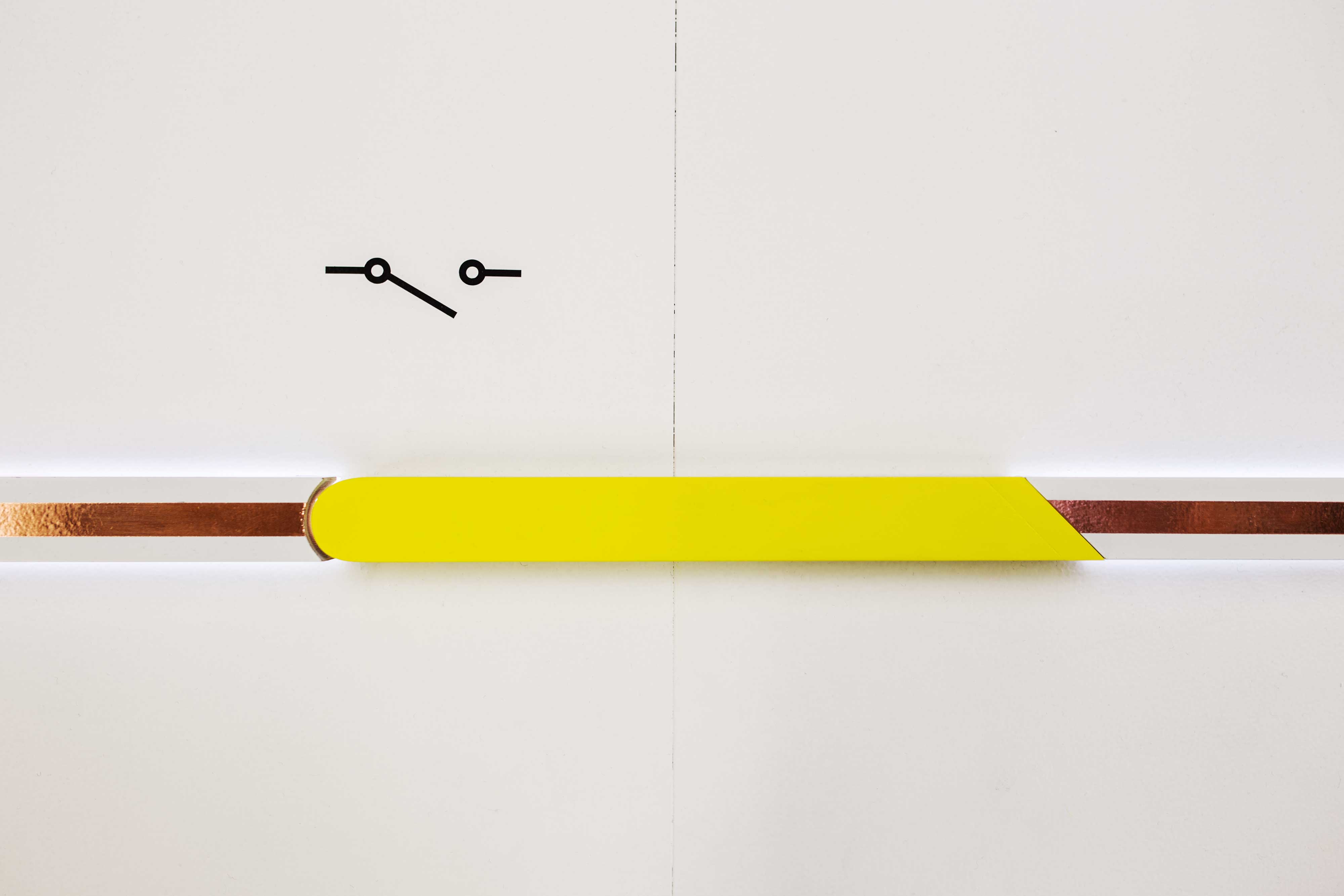 The voltage is represented by batteries, which can be switched on or off. A voltmeter shows the numerical value of the voltage. 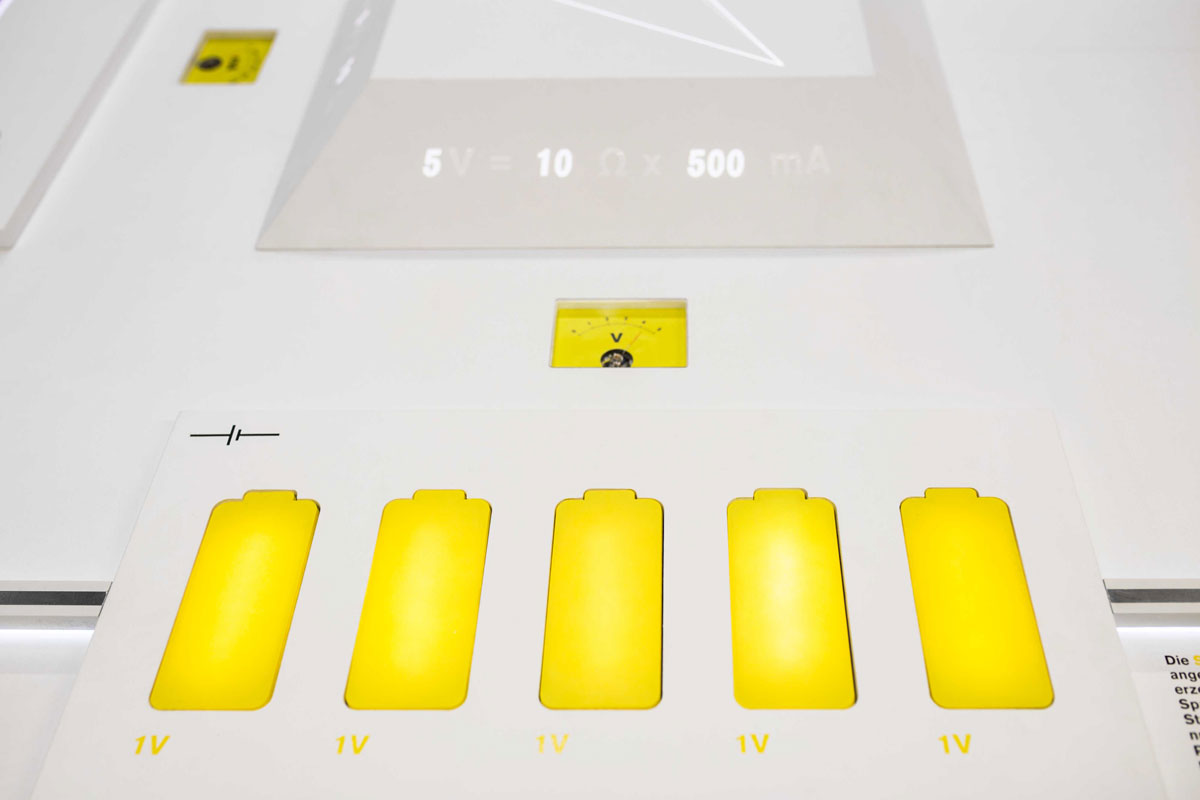 A loudspeaker, a light bulb and a value set by a rotary knob can be used to increase or decrease the resistance. If the loudspeaker is active, a noise is played back. If no resistance is set but a voltage is applied, there is a short circuit and the LEDs turn red. 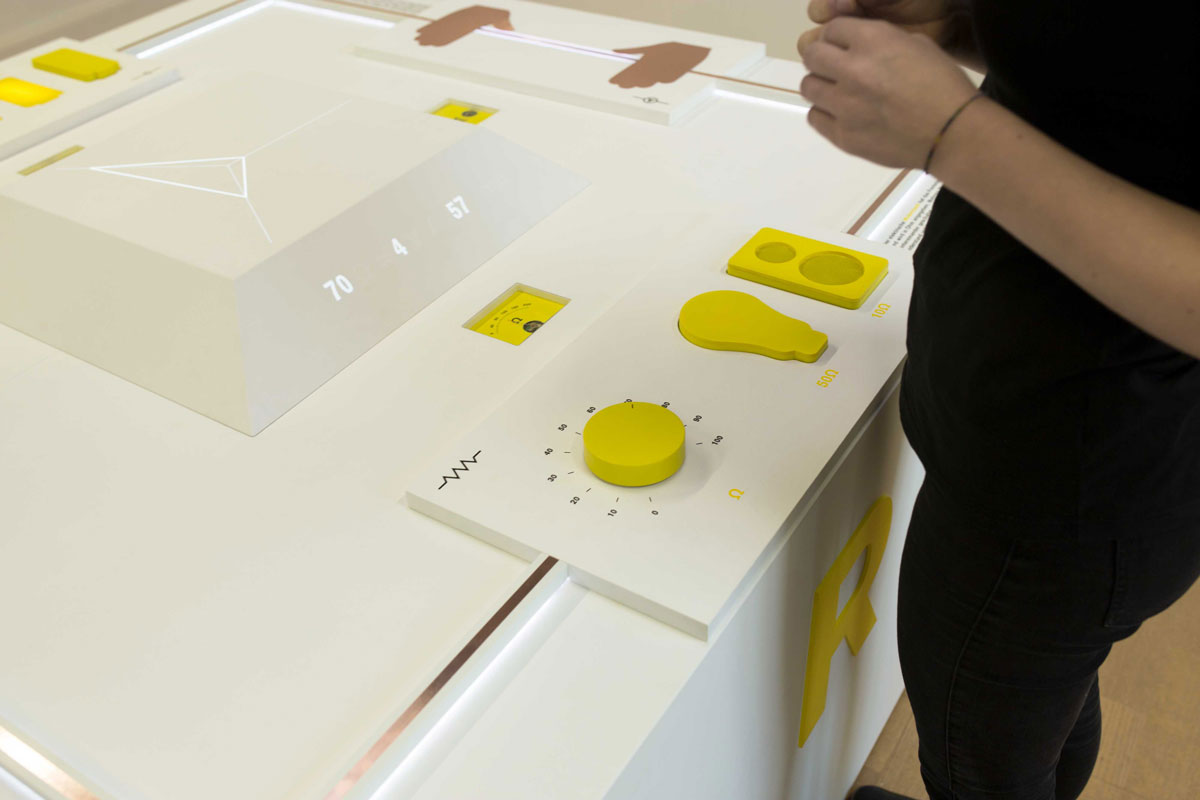 The current results from the calculation of the two quantities voltage and resistance. It cannot be influenced directly and can therefore only be experienced through feedback, which is shown here by a vibration. 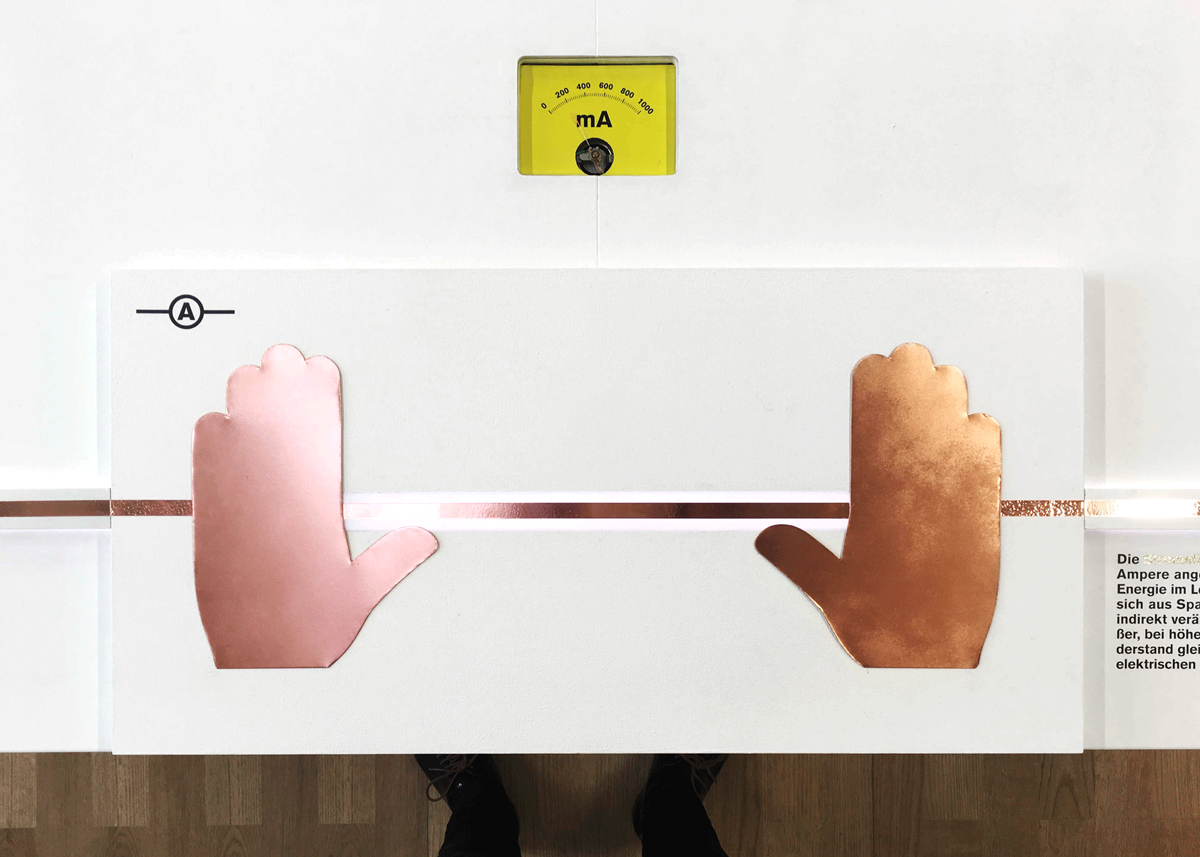 The project "ohm's law" was developed in cooperation with the "Deutsches Museum Munich" for the physics department. Our team decided to work on the topic Ohm's law. Through visiting the museum in Munich we were able to examine the current exhibits and developed our concept based on them. 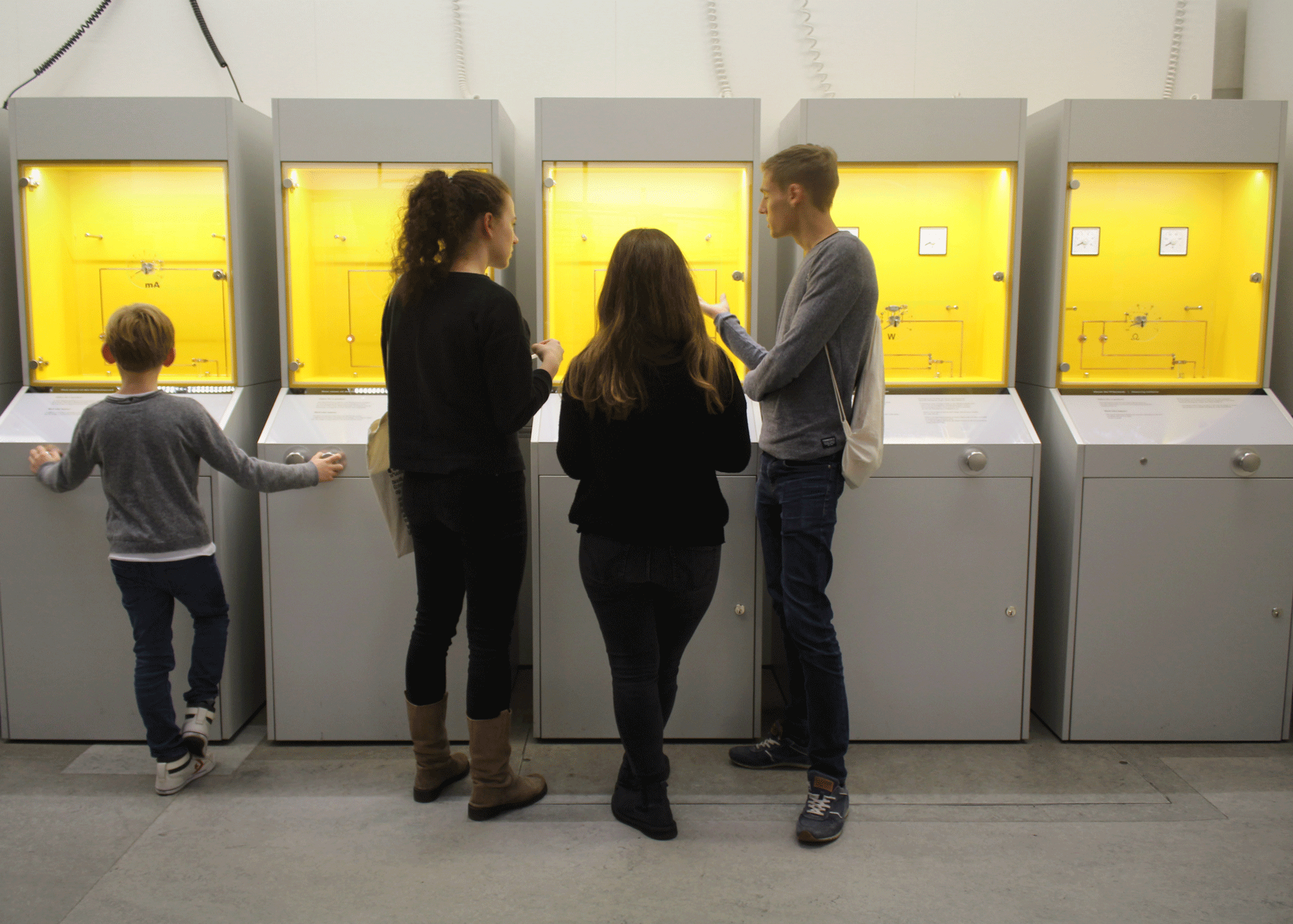 What is Ohm's law about?

Ohm's law describes the relationship between current, voltage and resistance. In simple terms, Ohm's law states that when the voltage in a circuit increases, the current goes up, and when the resistance increases, the current goes down. In physics classes, this is usually explained using physical experimental setups, such as the bead or water model.

Besides visiting the "Deutsches Museum Munich" we interviewed a physics teacher from my old high school. Our aim was to understand in which ways topics like ohm's law are explained to students. Moreover we wanted to find out what are the advantages and disadvantages of these explanatory models. During his time teaching he had already used various models to explain Ohm's law. However, he came to the conclusion that the use of real electronic components for the construction of an electric circuit serves best for the explanation and could be understood by most students.

Through the research following top findings were found:

1. The bead and water model helps students to visualize the dependencies of the variables in particular

2. Models with many individual parts are very prone to errors

3. During classes, the teacher and his colleagues have had better experiences with experimental setups with real electronic components

In the course of the research we decided for an enlarged illustration of a real circuit, which consists of different stations, at which the individual physical quantities are made experiencable.

To validate our initial ideas, we first built a scaled-up circuit using different objects, such as lego, pencils, and tapes. In a second round we already used paper and cardboard to built the different interactive stations.

By using the prototypes, we were able to ask other students how they understood the set-up and where they had problems understanding it. Based on the results of the interviews, the direction of the final design was given. 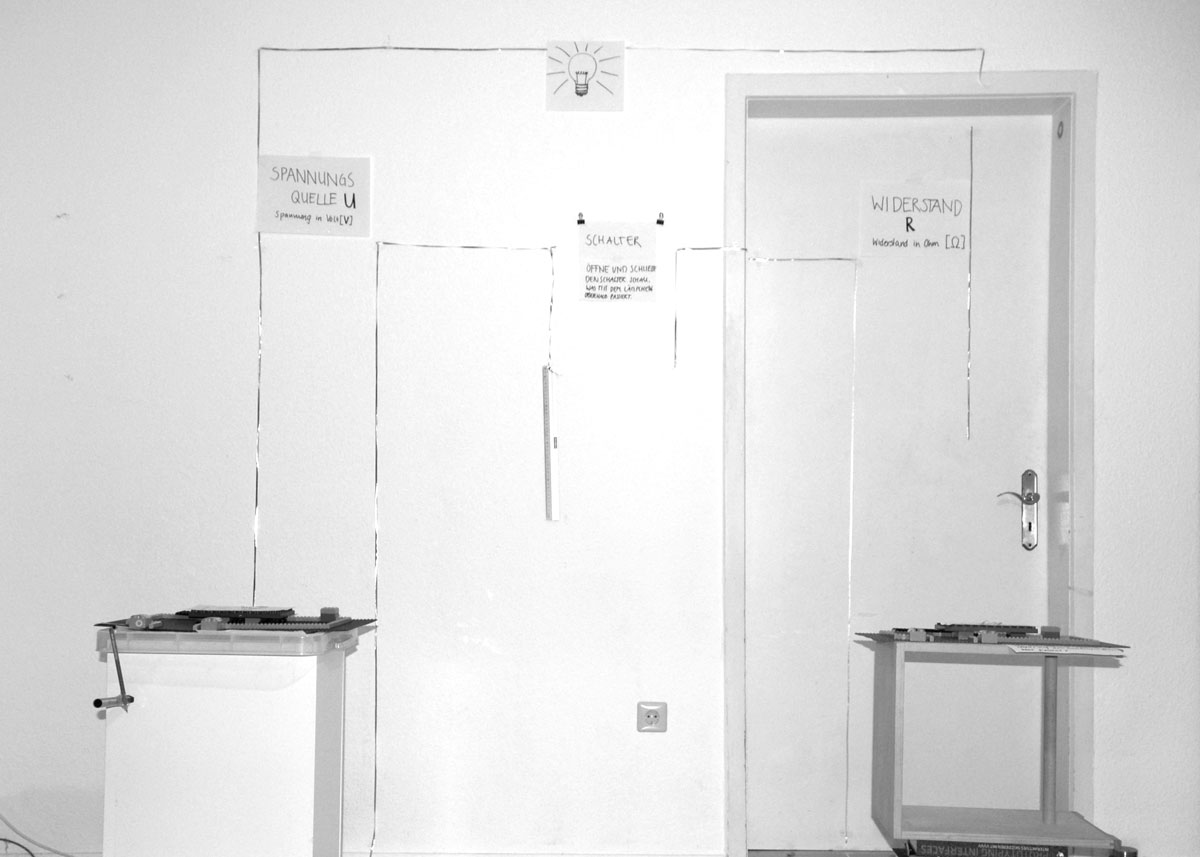 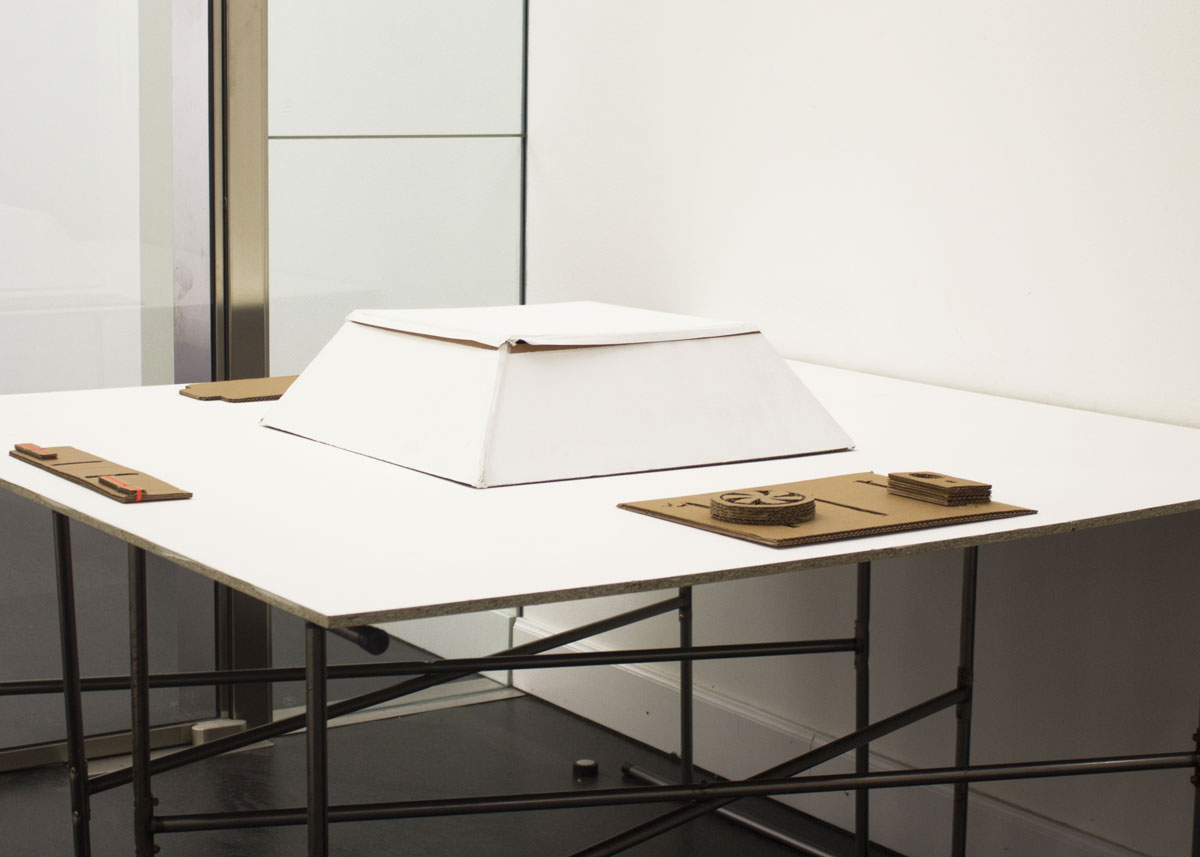 Prototyp out of cardboard

The foundation (desk) of the final setup was built with the help of "Sinn und Zweck Möbelbau", a carpenter's workshop in Hesse. All other non-electronic components were cut to size or milled in the university's own wood workshop. 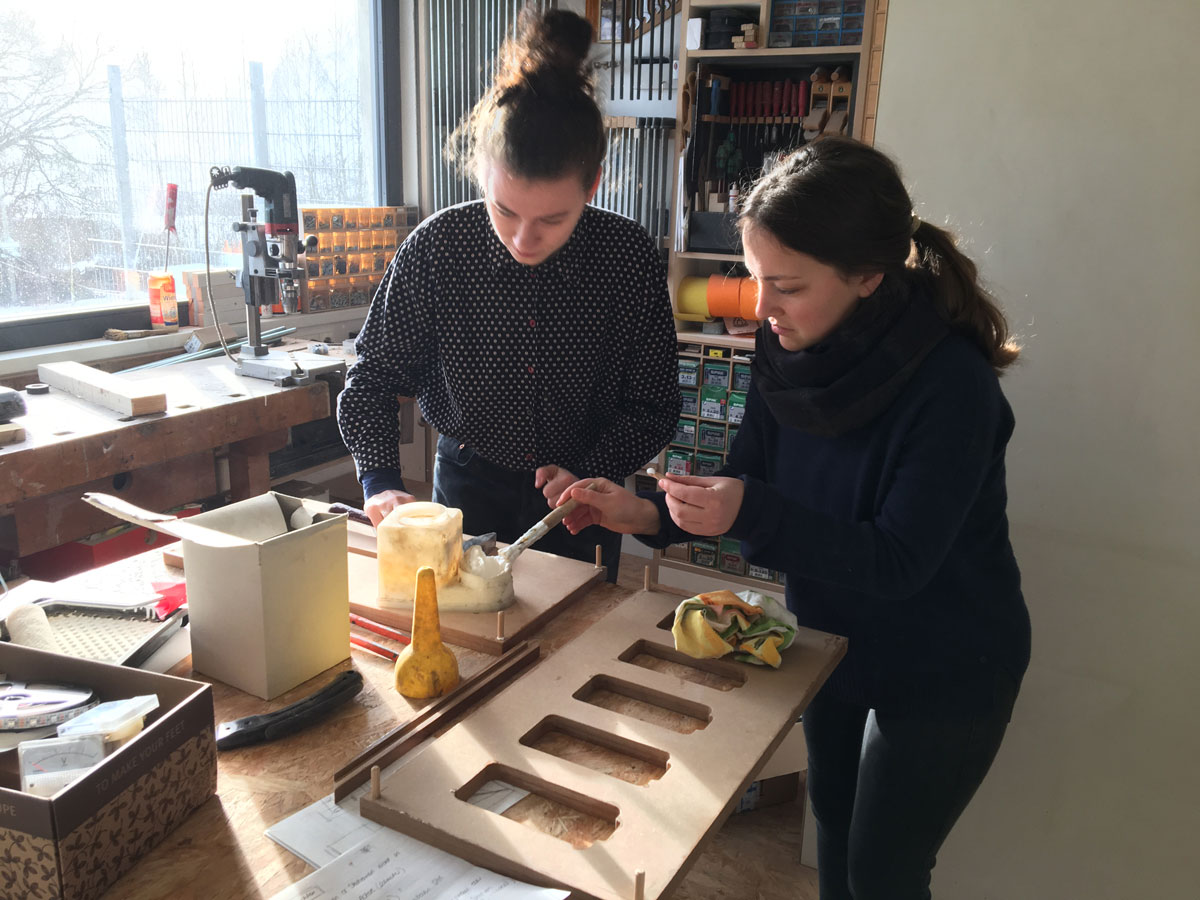 Integrated in the setup are LED bands which are used to display the "running" current. In addition, capacitive sensors were used to provide feedback in form of a short vibration when the user touches the current measurement station. All electronic components arrive in the center of the table and are controlled via an Arduino, which is coupled with a Raspberry Pi. The Raspberry Pi also controls a projector that is mounted above the setup. The projector beams a visualization into the center of the table, which shows the dependencies of the variables in the form of a dynamic triangle. 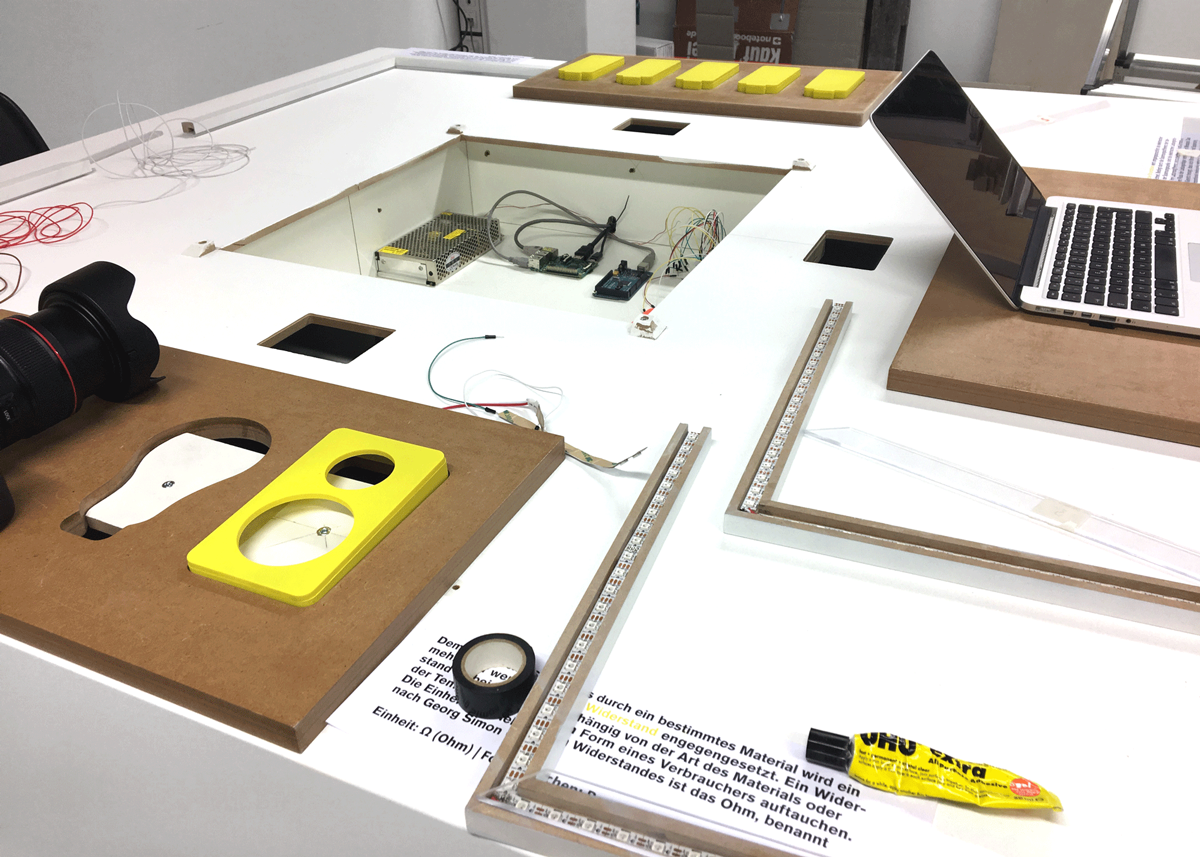 The inside of the interactive table 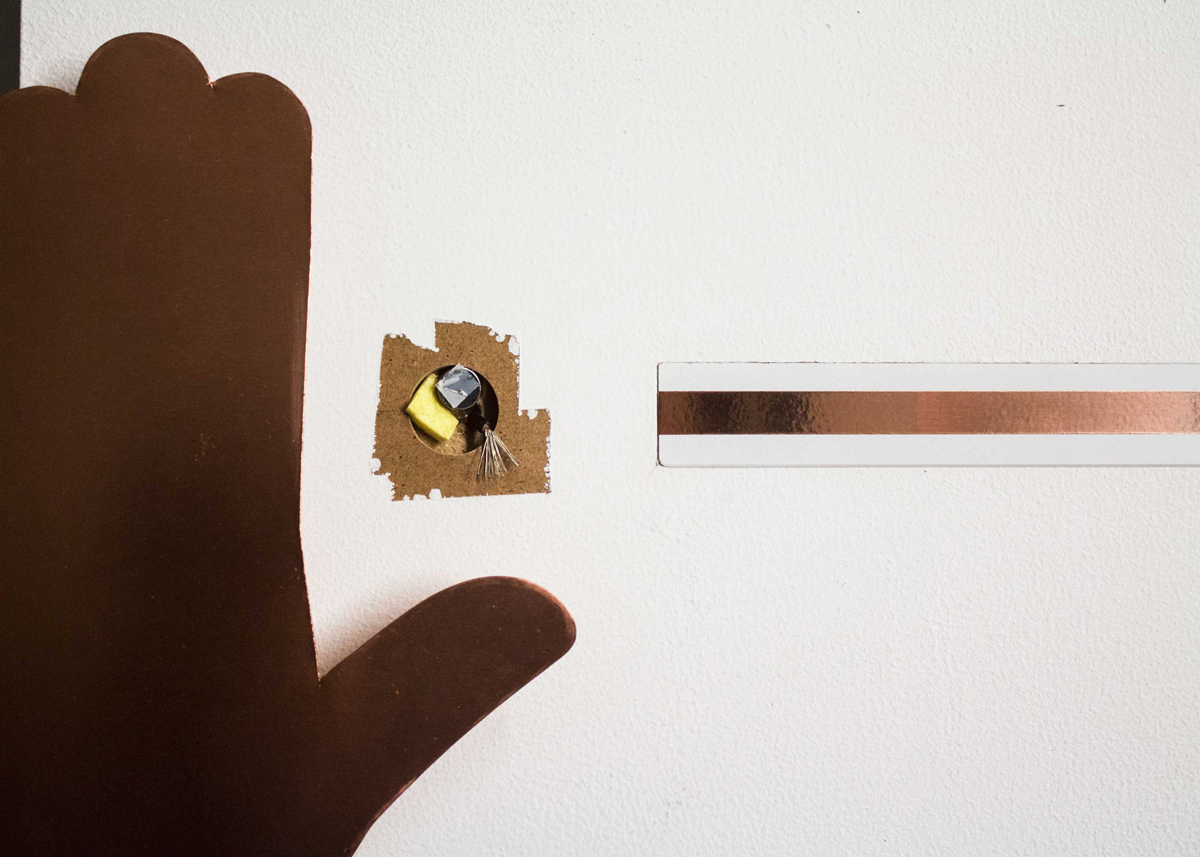 The vibration sensor under the copper parts